I love animals. Who doesn’t?

Ok, ok, some people don’t (and that’s fine…I suppose). Because of the great love people have for animals, animal-assisted therapy has started to gain some momentum. Researchers have studied the effects on therapeutic outcomes with several different kinds of animals. One study found that children in speech therapy assisted by a dog had improved behaviors and better engagement with their speech pathologist. There has even been some research completed about the use of dolphin-assisted therapy, though it has been highly controversial and met with a lot of opposition. Therapy offices and clinics often have office pets. In fact, my lovely best friend, who is a counselor, has an office cat (named Sigmund Freud…awesome). He’s very selective about who he chooses to accompany to therapy. In the opinion of my lovely friend, he often goes with the patients that need a little extra love that day.

One form of animal-assisted therapy that is often cited is hippotherapy. Hippotherapy involves speech, occupational, physical, or behavioral therapy that is based on the movements of a horse (hippo is the Greek word for horse). Hippotherapy isn’t centered on the horse itself, but rather the movement of the horse’s gait. The idea behind the therapy is that by manipulating the horse’s movement, the recipient of the therapy activates their neurological, cognitive, sensory, and motor cortices. Trained therapists know how to move the horse in specific ways to engage specific aspects of theses systems. Once the systems are engaged and improving, theoretically, therapeutic efficacy will increase.

Some evidence has come out to highlight the effectiveness of hippotherapy, a lot of which involves motor disorders. Some additional research has been conducted to investigate the tie between hippotherapy and outcomes in speech therapy. One such study was this study , which found that children who received hippotherapy and speech therapy (vs. speech therapy alone) were reported to have increased speech-language abilities. More research is needed to ensure that this is truly an effective form of therapy. In addition to research-based evidence, there is A LOT of anecdotal evidence, including this news article (and this video) of a local hippotherapist who strongly believe in the power of hippotherapy.

All of this to say is that hippotherapy can be a great option. If you’re thinking about adding hippotherapy to your therapy repertoire, make sure to do your research and ask lots of questions! 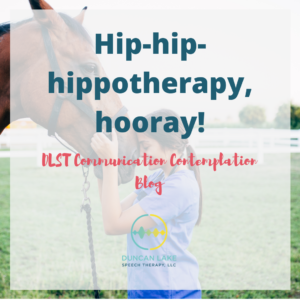