If you follow Duncan Lake Speech Therapy, LLC on Facebook or on Instagram, you already know that June is Alzheimer’s and Brain Awareness Month. Speech-language pathologists can treat patients with Alzheimer’s and other degenerative diseases, and help with memory and cognition as well as planning for future decline.

I have a deep passion for Alzheimer’s research and understanding best practices for treating individuals with this disease. This, combined with my goal of bringing you informative posts in the Communication Contemplation blog, has resulted in this – Duncan Lake Speech Therapy’s first ever Research Rumination! Don’t worry – I’m going to break this down SparkNotes style.

I have had a number of people make comments this week about SLPs and their role in caring for individuals with Alzheimer’s. One of the most important tasks that must be completed when considering an Alzheimer’s diagnosis is a comprehensive assessment. This provides valuable information for diagnosis, but also to measure against as the disease progresses. SLP often become involved in cases when speech therapy is considered as a part of the treatment plan. However, could SLPs play a much larger role in the identification of the disease?

What does this mean? IN BRIEF (and I mean very brief): Because so many brain functions are required to perform language-based tasks (like memory, use of vocabulary, processing speed), decline in language performance can indicate a decline in cognitive performance. So, a decline in one’s ability to use language can be an early indicator of Mild Cognitive Impairment, the precursor to dementia.

As a speech-language pathologist, this means to me that SLPs not only play an important role in treating individuals with Alzheimer’s and other dementias, but also in helping to identify them. In the words of the authors, “the possibility that language performance impairments are early indicators of MCI is of considerable significance to speech-language pathologists (SLPs), who are uniquely qualified to detect subtle language impairment by virtue of their training (708).”

If you have memory or thinking concerns about yourself or a loved one, please contact your/their primary care provider. Early diagnosis can significantly change a treatment plan! 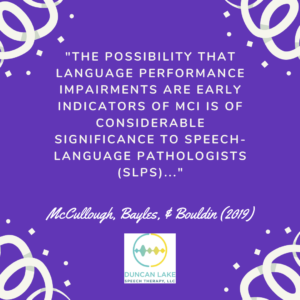