Who remembers this scene from what may arguably be one of the best teen movies of the late 90s? Julia Stiles (Kat) slams her head on a light fixture at a party and sustains what Heath Ledger (Patrick) determines is a concussion. Kat says funny things. She keeps falling asleep. She throws up. Overall, humor ensures.

This is a pretty common portrayal of concussions. While some of it might be true (funny things people say, etc.), what is not discussed nearly enough is the fact that concussions are actually BRAIN INJURIES. REAL BRAIN INJURIES.

A concussion is, like a traumatic brain injury, a bump/blow/strike to the head that results in a change in brain functioning. They’re often considered “mild” TBI because they’re not life threatening. However, the key phrase one should focus on here is “change in brain function.” Concussions can cause serious changes the brain, even after just one. After multiple, it becomes much more serious.

They’re pretty prevalent, too. It is estimated that between 1.7-3.8 million concussions related to sports/recreation occur each year. The CDC reports that each year, 283,000 children visit the ER each year in the US for concussion related injuries. It is also estimated that people underreport concussions by HALF (5 in every 10). HALF!

Concussions can have serious consequences if not treated. Don’t believe me? Let’s ask the experts.

People, ages 12-40, with and without history of concussions, were given a writing task to complete.

These findings suggest that individuals with a concussion history, particularly a history of multiple concussions, may continue to experience difficulties for a long period after injury and are likely to benefit from more complex and ecologically valid assessment prior to discharge.

21 war veterans, 7 with a history of concussion(s), were given memory tests. While the overall scores were the same, the concussion group scored significantly lower in specific areas. These differences suggest that “the [concussion] group were less successful in retrieving episodic information and eliciting self-cueing.”

While we tend to think of concussions as “not a big deal,” it’s safe to say that there are some serious implications for concussions if not treated appropriately. Please take caution when participating in activities that may result in hits to the head (PLEASE WEAR HELMETS, PEOPLE!). If you suspect that you or a loved one may have sustained a concussion, just go to the ER. The consequences of not doing so far outweigh the inconvenience of having to go.

And, as always, your friendly, neighborhood speech-language pathologist will be here to answer questions. 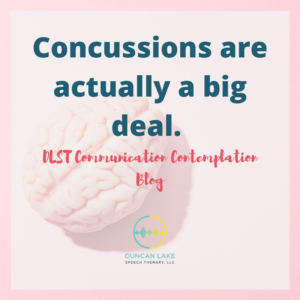