Following my quick Q&A video on the DLST Facebook and Instagram pages, I had even MORE questions about gender-affirming voice modification. You know I love audience participation, so I’m so happy people are asking great questions and learning more about this service.

Since my video addressed the basics of voice modification, the rest of the questions this week were a bit more specific. Overall, they fell into 3 big umbrellas.

Why do SLPs offer this service?

For trans folx whose voices don’t match with their identity, it can trigger a whole host of feelings including stress, sadness, overall unhappiness, and anger. It can also trigger dysphoria, which can lead to significant depression. Depression by itself is harmful. There are 700,000 trans folx living in the United States according to the Human Rights Campaign. According to the National Alliance on Mental Illness, “48% of all transgender adults report that they have considered suicide in the past 12 months, compared to 4% of the overall US population.” Given all of this information, the service is very much needed. If helping people match their voice to their identity helps them avoid dysphoria and feelings of sadness, then LET’S DO THIS.

Furthermore, people may seek out this service for safety reasons. According to the Human Rights Campaign, at least 34 transgender or gender non-conforming people fatally shot or killed by other violent means, the majority of which were Black and Latinx transgender women.” This number is likely VERY underreported. And we’re just talking fatalities, here. 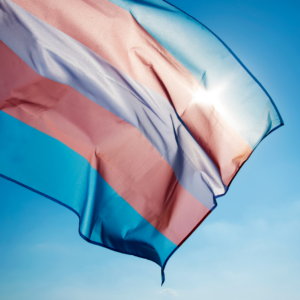 This kind of sounds like something someone could do on their own. Why don’t people do this instead of coming to you?

There are plenty of people who do do this on their own. They follow YouTube videos or Reddit threads or advice from people in support groups. While this may work for some, the vast majority of trans folks that I have talked to about modifying their voices come to me after having an unsuccessful journey with this tactic. There are a lot of reasons why this doesn’t always work.

Each individual voice, body structure, and individual is so unique that skilled therapy is needed to troubleshoot when things aren’t going right or when corrections need to be made. Video tutorials can’t shift treatment based on what’s happening. In our sessions, too, we address more than just pitch – we also throw in resonance, intonation, and social communication. I’m not sure how many YouTube videos address those. Plus, speech-language pathologists and vocal coaches have the knowledge to be able to teach people how to modify their voices in a smart, SAFE way.

And safe, I mean we take into consideration things like vocal hygiene. Remember that? We also know when to push people to a comfortable limit and when to say, “HEY, your voice is cracking and your neck is really tense. Let’s try practicing in a safer pitch zone.” I have had a number of people come to me seeking gender affirming voice modification who have attempted to train their voices on their own only to sustain some sort of vocal damage, including significant laryngitis, vocal nodules, and laryngeal pain. Ouch! No one wants that! Trained professionals help to alleviate the hazards associated with modifying voices.

However, some people don’t have access to this service either because of availability or cost. This is my call in to other SLPs – we need more competent service providers in this area of speech-language pathology. We need various modalities of presenting voice modification (classes, grants, etc.) to folx who need it.

Not all trans or gender non-conforming folx have modified their voice. Why is that?

I’m asked this a lot.

I appreciate all of the questions and curiosity this week, friends. Please continue to do some Googling of your own and learning more about this topic if you’re so inclined. Otherwise, as you know, your friendly, neighborhood speech-language pathologist is here to answer questions. 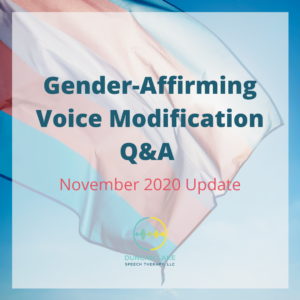