Alzheimer’s disease is the 6th leading cause of death in the United States. Over 5 million people are diagnosed with Alzheimer’s, and is the cause of death for 1 in 3 seniors. Despite these big numbers, Alzheimer’s can still be a confusing or even unknown topic in many of our households.

As I always say, part of my job is to make sure that the people I serve are informed. Today, I wanted to highlight common Alzheimer’s myths, and why they are, in fact, myths. 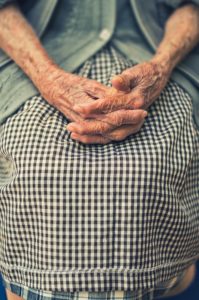 Dementia is an umbrella term for a progressive neurodegenerative disease that causes brain function loss (memory is most common). There are many types of dementia, Alzheimer’s included. Other types of dementia include Lewy Body Dementia (Robin Williams was known to have this), Frontotemporal Dementia, and dementias that result from other progressive diseases such as Huntington’s or Parkinson’s diseases. Each one presents with its own characteristics. Specific characteristics of Alzheimer’s can be found at the Alzheimer’s Association.

Myth 2: Alzheimer’s and dementias are a normal part of aging.

As we get older, we do start to have some forgetfulness. Losing your keys or forgetting about a lunch date with a friend but remembering it later are normal forms of age-related memory loss. These types of memory loss do not impact day-to-day life (though it can be a bit inconvenient). Memory loss occurring from a dementia significantly impacts daily living. Forgetting the names of close friends and relatives, getting lost while driving in a familiar area, and repeating oneself over and over again or asking the same question over and over again are not signs of typical age-related memory loss. Once safety or daily life are affected, it is time to seek medical assistance.

Myth 3: Flip side: Memory loss means I have Alzheimer’s or another dementia.

As I mentioned, if your life or safety is not being significantly impacted by the memory loss, it is likely normal age-related forgetfulness. Keep an eye on it if you are concerned about yourself or a loved one, and know the 10 early signs and symptoms of Alzheimer’s.

Myth 5: Alzheimer’s can be prevented.

There is no known prevention of Alzheimer’s. However, there is plenty of research that shows certain activities and lifestyle habits can improve risk. Family history, age, genetics, and health status (healthy diet, exercise, heart health, etc.) can decrease one’s risk of getting Alzheimer’s. Improving risk, though, does not mean that one will not get Alzheimer’s.

Speaking of risk factors, there is also a huge racial disparity in Alzheimer’s diagnosis. As I mentioned on our Facebook page, Black Americans are nearly 2 times more likely than their White counterparts to be diagnosed with Alzheimer’s. Latinx folks are 1.5 times more likely. Please have a look at this study posted in 2017.

Myth 6: Alzheimer’s can be cured.

There is no cure for Alzheimer’s as of right now. There is one drug that can slow the progression of symptoms for up to a year in about 50% of individuals who take it, but there is no cure.

This is why I chose to sponsor a team for Walk to End Alzheimer’s. The Alzheimer’s Association is leading the way to find appropriate treatment (and maybe, someday, a cure) for Alzheimer’s disease. Consider joining our team if you are interested, or start your own! 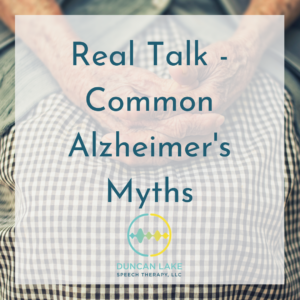