We live in a society that values politeness in uncomfortable situations. Have you heard the term “Midwest nice?” It’s very real.  While this can be very pleasant (“Hey, thanks for not bringing up the terrible COVID-cut I gave my bangs!”), when it comes to tough conversations about the kiddos, it can be somewhat problematic.

When parents have concern about their children, the first people they reach out to are friends and family. Well-meaning loved ones dole out advice, often as a means of squashing panic and passing on long-held misinformation about child development. It is rarely (read: never) from a place of malice! However, the passing on of this well-meaning-meaning-advice-that-is-actually-a-myth can cause some parents to not seek interventions for their child.

We know from research that early intervention is key in both helping kids catch up and reducing the chance of delays and persistent difficulties down the line. We also know that the time it takes to intervene early in life (0-5) is a fraction of the time it takes to intervene into school age. So, today, we’re going to talk about some of these myths and why they’re myths.

**Before we start, I will say upfront that I am guilty of saying a few of these to parents prior to my career as a speech-language pathologist. In fact, I’m guessing we’ve all done it. Let’s give ourselves some grace, and know that we don’t know know until we do. When we know better, we do better (myself included).** 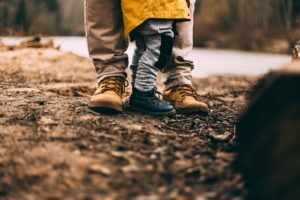 “Your grandfather/your sister/my child/________ didn’t talk until they were 5. They didn’t get speech and they are fine!”

While I’m sure that your grandfather/your sister/this child is a wonderful person, not talking until 5 is a major red flag. Here is what we know. We know from research that while some  late talkers do catch up, others continue to have persistent language difficulties . Intervening early will help alleviate some of the academic struggle that may come down the road.

Questions to ask to poke into this a bit more: Did grandpa like school? Why/why not? Did my sister need help in school? Does your child attend speech-language therapy now that they’re older? Maybe they didn’t get speech when they were young, but did they have a hard time in school or in conversations with others? Asking these questions might help clarify what “fine” means.

If I had a dollar for every time I heard a parent say that they had been told this, I would be living in a luxury villa in Bonaire. This one is common because to us grown-ups, it makes sense.

For children, that’s not the case with talking. It is way easier to talk than it is to not talk. Think about a time when you were giving someone the silent treatment. You eventually caved, right? That’s because there is way more effort in trying to communicate without talking than there is with talking. If a child could talk, they absolutely 100% would because, simply put, it’s way less work.

“Their siblings do all the talking for them.”

This goes with the same logic as above. It’s way easier for someone to speak for themselves.

“English isn’t their first language, so of course there’s a delay!”

Bilingualism does not cause a language delay. While bilingual children may start speaking slightly later than monolingual children, they will still hit their milestones well within the typical timeframe. Look at the whole picture – does your child have a good number of words in total? Are they adding words in either language consistently? Do they follow directions in one or both languages?  If they do not, it’s important to seek out assistance from a speech-language pathologist.

Here is our very basic rule of thumb: 1 word at 1 year, 2 word combinations at 2. As I’ve mentioned before, it is much more nuanced than that (I even wrote a blog post about this!), and we can’t go by word count alone. However, we look for milestones. When children aren’t hitting their milestones, we need to know what’s going on.

A resource that I use frequently is the CDC Milestone Guidelines. If someone tells you, “It’s normal for _______,” do your own fact checking. It doesn’t mean it’s time to panic! It means it’s time to ask for some help if needed.

Agreed! It’s not time to worry! However, the idea of wait-and-see is an outdated approach.

You can wait and see. Some kids do catch up on their own. However, there’s no way of knowing who those kids will be or what “catch up” truly means.

Here is what I want you to take away from this post: if you have concerns about your child, talk with whomever you want. They want what’s best for you and the child, which sometimes means getting a “Midwest nice” response. That’s OK! While you’re getting this advice, make sure to do your own homework. If you continue to have concerns, please don’t panic. Call a speech-language pathologist, and we will help you. 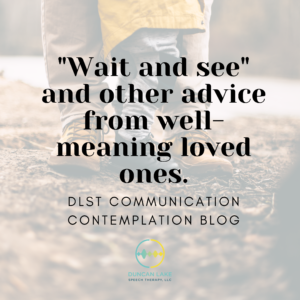