Today, we continue our Fall Language Series. Last week, we talked about language development at the apple orchard. This week, we’re taking it to the pumpkin patch, AAC style.

For those of you who don’t know, AAC stands for alternative and augmentative communication. AAC is, essentially, any form of expressive language that isn’t spoken words. This could be anything from writing notes to sign language to using pictures to communicate to using a high-tech device to generate speech. When we think of AAC, we think that only folks who can’t speak use it. However, we have seen time and time again the benefits of using things like core boards (a form of AAC) with young children to help teach sentence structure, sentence expansion, and vocabulary.

AND October is a month filled with pumpkins. So, friends, let’s take an AAC-focused trip to the pumpkin patch, shall we? 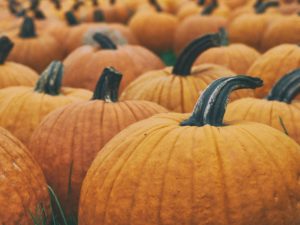 For those of you who have a system in place for AAC, make sure to bring it! If it’s electronic, make sure it’s charged. Bring a back-up if needed! In fact, having a no-tech option might be good as the weather at the pumpkin patch can be unpredictable (especially here in Michigan).

For those of you who do not have a system and would like to use AAC at the pumpkin patch for language enrichment, I made this Pumpkin Patch Activity Board for you use! Easy peezy!

FOCUS ON MODELING (…but user involvement is very encouraged!)

I’ve said it before, I’ll say it a million times – MODELING IS POWERFUL. While you’re at the pumpkin patch, model the heck out of whatever you’re doing. Your AAC user may or may not want to use the system, but having it there and modeling is just like modeling verbal language. They’re picking up on structure and vocabulary while watching you use it. Plus, with all of these “fringe,” or not-often-used, words happening at the pumpkin patch, you might have to do some searching to find vocabulary (…where do you find the word “pumpkin?”). That’s great for your AAC user to see too!

If your user is interested in participating and communicating using their system, go for it.

Ok, so yes. Modeling is important. However, don’t let overwhelm take over! You do not need to model every single word you say. The pumpkin patch has a lot going on. Your kiddo might be running around with their siblings or friends or very invested in searching for the perfect pumpkin. That’s completely fine. Focus on a few, key core words to model. Some core words include: go, want, see, in/out, like, yes/no, or other specific vocabulary like orange or pumpkin. Pick a few of those and hit them hard.

For example, if your child sees a pumpkin they like, say, “I think you want that big pumpkin,” while indicating “want” and “pumpkin” on their system. Maybe those are the two words you focus on all day. Great! Don’t overwhelm yourself.

If you’re bringing friends or family along with you, have them also model if they are willing. Have your AAC user participate in the check-out process if you are buying some pumpkins. Help them indicate appropriate words (“want,” “thank you”) for check out, or at least model with them there. The more people that use the AAC system with the user and the more situations the AAC system is used in, the better! It helps with carryover so much. 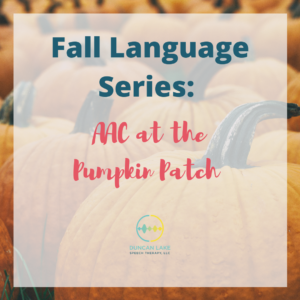