It’s the time of the year  toys and play get a lot of attention. Hey, I’m all about it! Play is such a powerful language learning tool, and, above all, is enjoyable for the children. I thought I’d take some time this week do discuss the connection between language development and play in more detail with a RESEARCH RUMINATION!

Remember a while back when I talked about the Netflix documentary, “Babies?” Netflix interviewed Kathy Hirsh-Pasek, a researcher, on the “First Words” episode. I even wrote a blog post about her work! Well folks, she’s back!

Hirsh-Pasek and her team put together a review of studies, all of which investigated the link between play and child language development. While many studies had been done on this topic at this point in time, Hirsh-Pasek and the rest of the team wanted to understand how play (versus than other factors) impacted language. Here’s what they found. 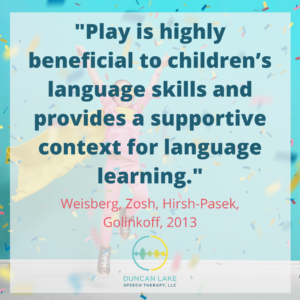 What’d they do?: The researchers unpacked lots and lots of studies that related to children and play. From those studies, they were able to draw some conclusions about how play impacts a child’s development.

Results: After reviewing the research, the authors of this study determined that play has four big functions as it pertains to language development. The first is that it helps builds symbolic knowledge. For instance, if your child has ever used a remote or a hairbrush or a banana as a “phone,” they’re using those items as a symbolic object. This helps develop word-referent knowledge (a phone in word form is a phone in physical form). Second, it involves a lot of social play (i.e. playing store or playing restaurant), which helps boost language skills. Third, play is, in itself, a very language-heavy activity. The more language-rich an activity, the more language a child hears, and the better the child’s language development.

Finally (and, to me, the most important), play helps promote language development because children are very engaged in these activities. The more a child attends to an activity, the more likely they are to actually listen to the words coming out of the mouths of their playmates and adults involved in the activity. Increased attention means that children are actually hearing what is being said (rather than ignoring it).

The authors went on to determine the roles of adults in play and language development. They found that guided or directed play impacted language learning the most. In other words, adults participate in play with the child rather than control the play.  The adult would not push or force children to play in any certain way, but instead offered input during an activity such as modeling new vocabulary within a context (such as “scrumptious” during a kitchen activity).

Overall, the researchers reported that “play is highly beneficial to children’s language skills and provides a supportive context for language learning.”

What does this mean?: We know that play is an important part of childhood. Now we know that it’s a huge part of language development. Child-led play is great, but can we beef up play time with some adult participation (NOT adult-dictated play, though).

The big take aways? Play is IMPORTANT. Let’s let kids PLAY MORE. At school! At home! Adults, join in with your kids while they play rather than dictating the play. Giving kids models for language during fun activities makes them more likely to listen and attend to what you’re saying. 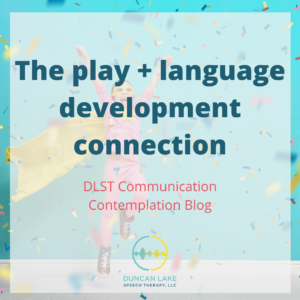